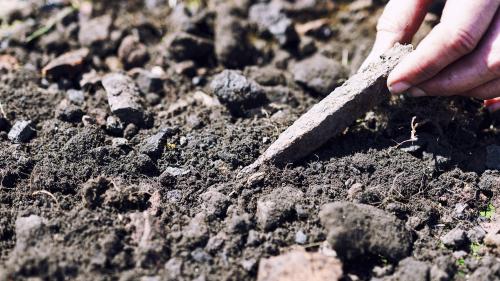 Our archaeology program began in the 1980s, motivated by the imminent construction of the Museum of Industry building on lands occupied in the 1800s by Nova Scotia’s earliest deep coal mines. There are very few surviving maps and photographs and so little is known of precisely what used to occupy the site. To get a sense of what might remain, we looked under the ground. Test pits were dug by archeologists and preliminary digs were carried out with the help of volunteers. This program revealed partial building foundations; it unearthed items and fragments related to household and industrial activities, especially objects associated with an iron foundry.

This foundry is believed to be the fourth oldest in Nova Scotia, and was erected by the General Mining Association (GMA) in 1828. The GMA was an English company that brought men, machines, and money to establish a coal mining community known as Albion Mines, which is now the town of Stellarton.

An industrial complex such as this had never before been established in Nova Scotia. The influence of the GMA also was felt in Cape Breton where they had extensive operations in Sydney Mines, North Sydney, and the Bridgeport area of Glace Bay.

To learn more about how the British Industrial Revolution came to Nova Scotia, our current archaeology program focuses on trying to conclusively find the Albion Mines iron foundry,  a significant part of the industrial activity supporting the coal mines.