The Tragedy of Westray 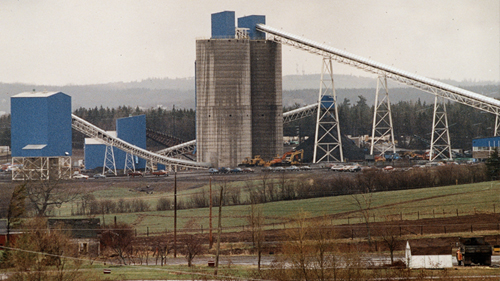 Pictou County, sustained for over 150 years on the toil and blood of miners, had to seek new industry. Offering a dedicated work force, they were successful in attracting large employers in pulp and tire manufacturing.

In the 1980s, however, high energy prices and unemployment excited interest in the rich Foord coal seam. In a scheme, controversial for safety, financial, and political reasons, Westray Coal began mining at Plymouth. Fully mechanized and electrified, the mine was extolled for embodying the cutting edge of safety and production technology. Coal was reached in April 1991.

On May 9, 1992, 26 men were laboring in the deeps, when at 5:18 a.m., a blue flame lit up the dawn sky at Plymouth. A black cloud roared from the mine portal – a massive coal dust blast, triggered by a methane explosion. By 6:40 a.m. a Westray draeger team was heading down the mine on foot. They were soon joined by brother rescuers from Cape Breton, Pugwash and Bathurst mines. 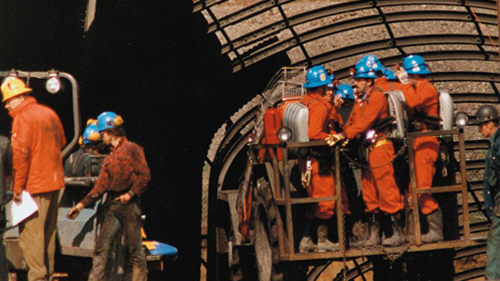 When television showed the world the disaster, the miners’ plight captured the hearts of people everywhere. Letters, cards and donations poured in, while the families kept their vigil, nurtured by their community. Members of the Plymouth Community Centre cooked for the large media contingent, while the Stellarton Fire Department Auxiliary provided thousands of meals for volunteers. Businesses and individuals alike donated food and services, while the Red Cross and clergy tended body and soul. A day care centre sheltered the children.

True to their valiant tradition, draegermen pushed down through perilous devastation. On May 10 (Mother’s Day), they uncovered 11 miners, killed. Over the next days, now aided by barefaced workers, they carried out bodies of four more comrades. But after six days, the company declared no hope, rescuers were withdrawn for their own safety and the bodies of 11 sons, fathers and husbands were abandoned in the deeps. The mine was sealed and will not reopen.

Later, in the largest ever civilian investiture ceremony, Governor-General Ramon Hnatyshyn presented bravery medals to 96 draegermen and barefaced workers at Westray. The ceremony, a first, recognizes the long, courageous history of rescue work here, which in the words of Mr. Hnatyshyn: “demonstrates … what is best about the human spirit, giving and sacrificing for one’s fellow citizens.”

Throughout the Westray experience, dangerous working conditions were alleged. After the disaster, the Premier of Nova Scotia called a public inquiry; also, criminal charges were laid against Westray’s owner, Curragh Resources, and two mine managers. The charges were stayed after a lengthy criminal trial. The Westray Mine Public Inquiry began in 1995.

“The Westray Story...is...of incompetence, of mismanagement, of bureaucratic bungling, of deceit, of ruthlessness, of cover-up, of apathy, of expediency, and of cynical indifference. It is a tragic story, with the inevitable moments of pathos and heroism ... an event that, in all good common sense, ought not to have occurred. It did occur and that is our unfortunate legacy.” Westray Public Inquiry Commissioner, the Hon. Justice K. Peter Richard

Soon after the explosion, the Westray Families’ Group was formed. To commemorate their loved ones, they created a park and erected a monument bearing the group’s emblem, “Their Light Shall Always Shine”, over a miner’s lamp emitting 26 rays of light. In their “No More Westrays” mission, the activist group has collaborated with labour and community organizations to promote workplace safety and legislative change.

Acting upon an Inquiry recommendation, the United Steelworkers lobbied for more accountability for workplace safety. Their “Westray campaign” led to Bill C-45, which amends the Criminal Code of Canada to assign criminal liability to organizations for acts of their representatives. From on-site employees to company directors — all now have a duty of care to their employees. The “Westray bill” passed Parliament with all-party support and came into force March 31, 2004. It came too late for justice for the Westray miners, but the conduct of company and regulatory officials in the tragedy has led to law reform. Inherent in Bill C-45 is the trust that there will be “No More Westrays”.

For the 26 miners who perished in Plymouth, Nova Scotia, on May 9, 1992, Their Light Shall Always Shine in this legacy to all Canadian workers.