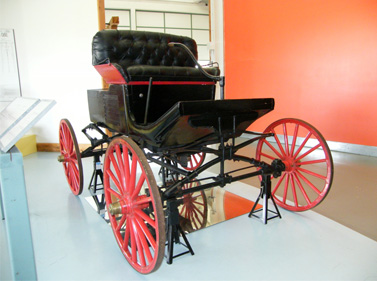 Victorian looks like a carriage with its wooden body, but hidden within is a simple drive mechanism for a gas-powered engine. It was built in 1900, not far from the Museum site, at Hopewell by furniture maker John MacArthur. It was the first gasoline-powered car built in the Maritimes.

MacArthur built it with carriage plans bought in Massachusetts and a two-cylinder, horizontally opposed gas engine (thought to be German-made) bought in New York. He built a frame of one-inch pipe, setting it on a set of extra heavy 30-inch wooden buggy wheels and attached the engine and simple, wooden body.

The engine operated a jackshaft, incorporating a cone clutch, a band-type brake, and an open differential. Final drive was by flat belts from each end of the jackshaft to the rear wheels. The carburetor consisted of a piece of one-inch pipe in which dripping gasoline was vapourized by in-rushing air. The radiator was a tank with two-inch pipes for air passage and the car was steered by a tiller.

The original belt-drive didn’t work well so MacArthur changed it to a chain and sprocket with a completely handmade chain. The vehicle’s top speed was 4-5 miles per hour and at even the slightest rise in the road it needed a push.

The vehicle had many features in common with the first mass-production car, the 1900 Curved Dash Oldsmobile. They looked very similar and both had a chain drive with a tiller. The key difference: the Oldsmobile worked.

Whatever dreams MacArthur may have had for mass-production were stalled by the Victorian’s less than stellar performance. Its combination of carriage construction and new gas-powered technology make it an interesting transitional experiment on the road to the age of the automobile.

There was another early attempt at auto manufacture in Amherst in 1901. S. B. Bowser, a bicycle maker, built his own horseless carriage in May. It reportedly had beautiful nickel plating but only one was built