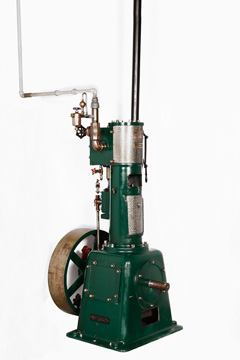 Whether fueled by wood or coal, steam technology powered the industrial revolution.
In our Age of Steam Gallery visitors can view some examples of steam engines from Nova Scotia and see how they were used.

Davies Engine
The Davies engine, made in Pictou, is effectively two linked steam engines. It was used to haul boats.

Robb Engine
Made by Robb Engineering of Amherst, it is a vertical steam engine that was used in a manufacturing plant in the United States.