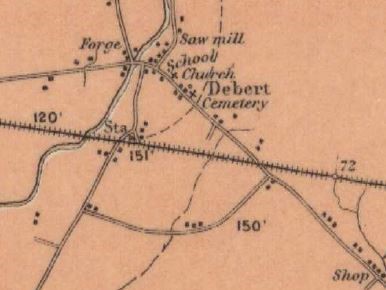 In Colchester County, coal outcrops in a 230-square-kilometre (km) area north of Truro. Most seams in this Debert-Kemptown Coalfield are not thick enough (less than 1 metre [m]) to mine, but a few small mines were opened in this area. The operations were short-lived, however, due to numerous faults.

In 1882, the Halifax newspaper, The Morning Herald, reported coal seams here: “one 12-14 feet (61-76 m) wide and four others varying from 2-4 feet (.61-1.2m)”, while Faribault and Fletcher maps of Nova Scotia (1884-1909 series) show shafts around North River, suggesting that individual or small mining attempts predated the first “official” mine opened by the Colchester Coal and Railway Company on Debert Mountain in 1903. The Debert Coal Mine operated from 1903 until 1910, and was reopened briefly in 1936, producing 5,472 tons. The first of these undertakings was located near the old Cottam Cemetery and close to the Debert River. The 1936 mine, to a depth of 61-76 m, was nearby on a side hill southeast of the old mine, about 6.44 km north of the Debert train station.

Biggest mine was at Kemptown

About 19 km east of Truro, at Kemptown, the Riversdale aka Kemptown mine produced 364,860 tons of coal during its lifespan (1920-1932).  A newspaper (undated record in Colchester Historium) advertised Kemptown Hard Coal.

The Coolen mine at Belmont put out 249 tons during its brief life in 1925.

In June 1999 Berichan Resources opened an open-pit mine at Cottam Settlement, about 7 km from Debert. By October, this mine was forced to close due to water problems.

Note:  On April 29, 1905, Samuel Eccles, James Eccles, and Amblish Matthews were injured in an accidental dynamite explosion in the Debert mine. The only death recorded in this coalfield appears to be Robert Dunlap in the Kemptown mine in 1928.