Mine Rescue Corps: The Draegermen 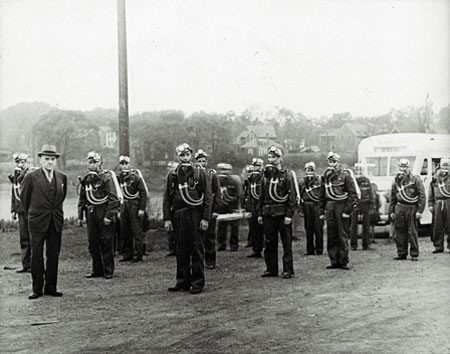 Draegermen are specially trained miners who go into hazardous (gas-filled, fiery, flooded, and/or devastated) conditions to rescue miners after disasters. They wear a breathing apparatus so they can work in carbon monoxide, methane, and other deadly gases. Beyond saving lives, they fight fires (with water hoses, or by building “stoppings” to cut off air) to save the mine, repair damaged lines and equipment, clean up falls, replace timber, open up sealed, gas-filled areas, and other activities where oxygen is needed to work.

Draegermen are not to be confused with the bare-faced miners who also accept considerable personal risk to go underground after a disaster, to rescue the fallen or to free the mine from hazards. These men do so only after the draegermen determine the mine has no noxious gases nor imminent threats.

As early as 1870, breathing equipment existed and was used in British mines. In 1906-07 the Dominion Coal Company set up a rescue station in Glace Bay with 20 sets of breathing apparatus, related equipment, and first aid supplies, the first such facility in North America. The equipment brand was Draeger - thus “draegermen” came to be the name for mine rescue workers. (The Oxford Dictionary attributes the name as Canadian so it appears that the name was coined in Nova Scotia with those first rescue workers.) Over time other brands of breathing apparatus were also acquired by Nova Scotia mining companies. 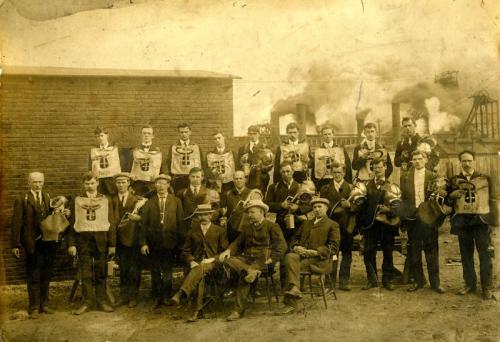 In their first years the Glace Bay draegermen fought fires at outside collieries; their success led to rescue stations being set up elsewhere. After a fire in No. 1 pit in Sydney Mines, Nova Scotia Steel and Coal installed 15 sets of Draeger apparatus in a rescue station set up in a converted PuIlman train car. Draegermen fought fires in Stellarton’s Albion mine in 1909 and 1910, spurring Acadia Coal to open its first rescue station in 1911 with 10 sets of equipment. Before long Acadia draegermen were having regular action as the mines there were fraught with fire, gas, and explosions. By 1912 there were rescue stations at New Waterford and Springhill; Westville’s Drummond Mine opened one in 1946.

In early days of  fire-fighting in coal mines, smoke helmets were worn. From a distance, bellows were used to pump air through a rubber hose into the helmets. When some oxygen was present, gas masks that filtered air were worn. Depending upon the manufacturer, the early equipment consisted of full-head helmets or a mask, attached by hose to an oxygen tank. 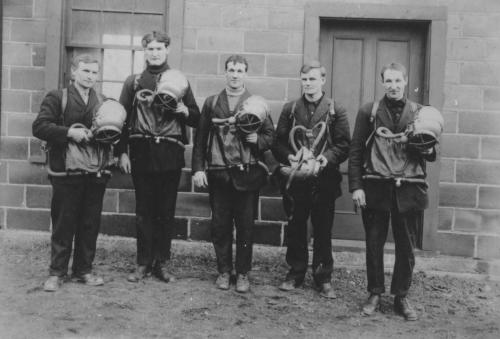 Over time the apparatus was streamlined. By the early 1940s the McCaa was used in all DOSCO-owned mines.  In basic terms, this was a unit comprising a 30-pound oxygen tank, reducing valve (to reduce the oxygen pressure so a man could breathe it), a regenerator, breathing bag, mouthpiece, and excess valve. This was all fitted onto a steel frame worn on the back. Straps from a skull cap connected to the mouthpiece and a nose clip. A battery-operated head lamp lit the way. 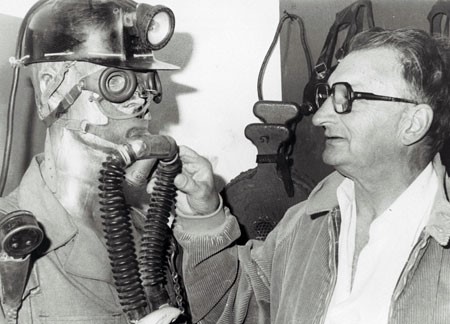 During the most recent Nova Scotia coal mine disaster at the Westray Mine in 1992, mine rescue teams wore equipment made by Drager.

Requirements for acceptance into rescue corps were strict. Members had to be certified as First Class miners with superior mining skills, aged 25-40 (although younger ones are known to have been accepted), of good health supported by regular medical exams, and of strong, fit physique. They needed to be cool-headed, dependable, co-operative, and a team player. After passing an initial intensive training period, they followed a regular regime that included working under conditions simulated to actual dangerous mine surroundings. In darkness they practised in actual gas, smoke, and wreckage, both above and below ground. As well, they were trained in first aid. Draegermen operated in teams of four or five, for a two-hour period. An equipped team would be waiting in a fresh air location, to take their place. It was imperative to return from a foray on time. 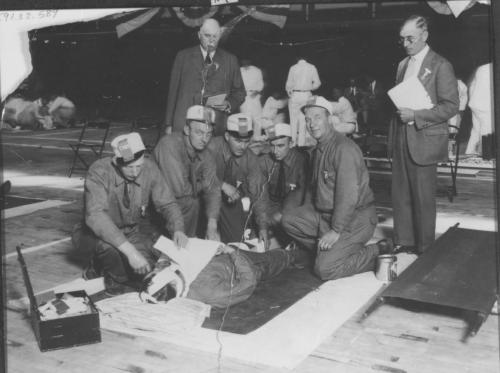 An unidentified Pictou County mine rescue team at a competition. MOI Collection I91.32. Scan 200600157

Competitions among mine teams kept skills sharp. Acadia Coal Company sent seven men to Louisville, Kentucky in 1930 for an international competition where the crowd favourite won two banners and “first prize for Canada”.

At the present time (2019), draeger work is under the overall direction of a Nova Scotia-New Brunswick standing committee made up of members from the mining industry and the provincial governments.  The salt, gold, potash, lead-zinc, and coal mines in these provinces have draeger teams, ready to leap into action when needed. They too participate in competitions. At annual, all-day, joint underground emergency exercises, teams from the different mines work together in full equipment, practice first aid, and get acquainted with each other’s mines. Draeger equipment is one of the brands still used today. Modern breathing apparatus has the same function, but now includes ice packs to keep wearers cool.