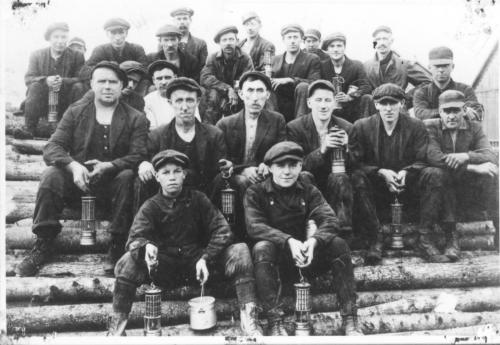 The Pictou coalfield, located about 14.5 kilometres (km) from the Northumberland Strait, encompasses roughly an area of 18 by 6 km, and comprises 15 major coal seams ranging from 1 to 14 metres (m) thick, in the three areas of Westville, Stellarton, and Thorburn-Greenwood. Although small, the field is rich with quality bituminous coal and has yielded about 55 million tonnes. 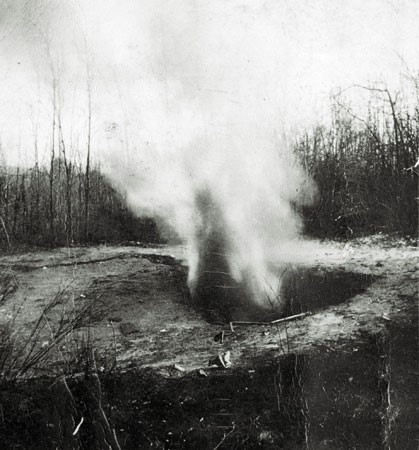 Methane gas spontaneously escaping from the ground in Pictou County in an explosive cloud. MOI scan 2006000630

The thickest seams outcrop at Stellarton where most of the mining has been. But their thickness and complicated geology have made them challenging to safely mine. In these veins of gassy coal overlain with a soft shale and sandstone roof, methane was so pervasive that it would hiss or burst out from cracks in the face.

Compounding the danger in Stellarton, especially in the Foord seam, was a propensity to spontaneous combustion. Every mine that opened in the Foord seam (at 13.5 m the thickest seam of bituminous coal mined in North America) ended in fire or explosion. The Allan Shaft (1904-1951) alone had eight explosions; experts considered it to be the most dangerous mine in the world. The Stellarton mines suffered numerous fires throughout their lifespan as did the gassy Westville seams where the first mine disaster in the new country of Canada killed 60 men and boys in 1873. Mines in the Thorburn-area seams, though less fire-prone, were not exempt from disaster. 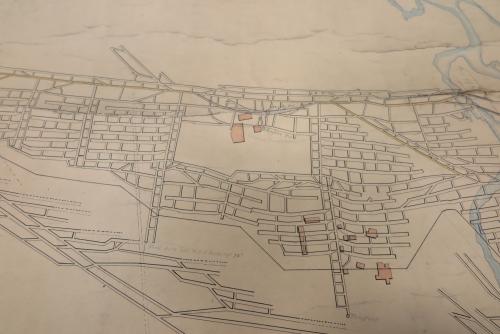 “Deep Seam Workings” / “Old Foord Seam Workings”, James W. Fraser, n.d. Detail of a plan mapping the locations of underground roadways and tunnels that show the layout of a mine, MOI collection, I97.30 plan 4. Surface structures are noted as pink shapes.

Coal is deemed to have been “discovered” in this coalfield circa 1790 by Scottish settlers, although the indigenous Mi’kmaq were well aware of methane burning at outcrops and along the banks of the East River. Nearby, Rev. James MacGregor mined coal on his property for home use, circa 1798. Surviving records indicate others applied for licenses around this time. The first substantive operation was Collier John MacKay’s mine, sunk in 1809 on the west side of East River. His lease later came to be owned by Edward Mortimer, George Smith, and Adam Carr until 1827 when their rights were usurped by the General Mining Association (GMA), an English company granted all of the mineral rights for Nova Scotia by King George IV. The GMA brought from Britain modern engineering and machinery, steam technology, and skilled colliers and created Albion Mines (Stellarton). They sank two shafts, erected the first steam engine in Nova Scotia for pumping and hoisting at the mine, built the first steam ship, the Richard Smith in 1830 for transporting their coal, and erected housing for their workers and superintendent. They also established mining operations in Sydney Mines and Bridgeport, Cape Breton. Industrial coal mining was underway. 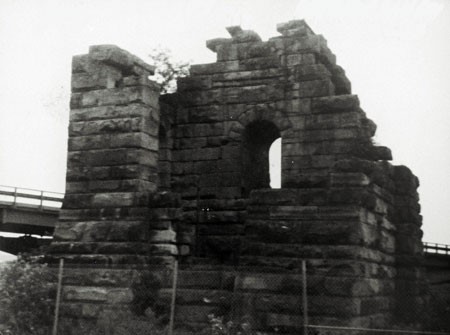 Ruin of the Cornish pumphouse, erected by the General Mining Association in 1866 to house the pumping mechanism for the Foord pit.  ca. 1987. The ruin was dismantled and became part of a reconstruction of the pumphouse on our site.  MOI scan 2006000638.

The GMA continued their activities until 1858 when their monopoly was revoked and other entrepreneurs moved into the coalfield. Several small, short-lived mines opened in Pictou County but what also arrived was large capital investment, which legacy endured here until the industry’s last breaths. 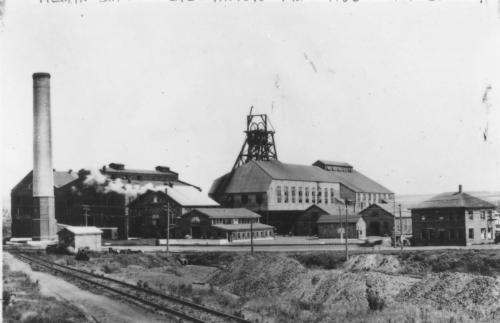 The GMA sold its Pictou County properties to the Halifax Company in 1872. In 1886 three of the four major coal companies operating in the coalfield - the Vale, Halifax, and Acadia - merged to form the new Acadia Coal Company. Acadia Coal was the pre-eminent coal producer in Pictou County until 1966. Over that time period it became a subsidiary of Nova Scotia Steel and Coal, which in turn was a subsidiary of BESCO and later DOSCO. Acadia’s last mine, the McBean in Thorburn, was operated for its final four years by the Pictou County Regional Development Corporation as the Thorburn Mining Company, while the Cape Breton Development Corporation was responsible for its operation. The only independent, the Drummond, succeeded since 1867 from the Intercolonial Coal Company, operated until 1980.

Underground mining ceased in Pictou County, except for the 8-month and tragic experience of the Curragh Resources’ Westray mine in Plymouth (1991-1992).  The rich coalfield is now being harvested by small-scale surface mining.