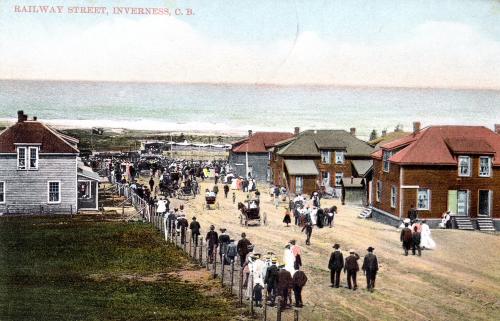 The Inverness County bituminous coal measures span the Gulf of St. Lawrence for about 80 miles northeast from Port Hastings to Cheticamp. While most of the coal is submarine, four deposits that extend farther inland have been opened from their outcrops on land. There are mineable coal deposits at Port Hood, Mabou, Inverness, and St. Rose-Chimney Corner. (St. Rose is not sub-sea.) Mining was curtailed in these areas due to proximity to the ocean floor, with consequent flooding. Also, the deposits here are characterized by faults and fractured strata, unlike under-sea mining in Cape Breton County where faults are rare and the sea bottom is mostly rock. The Mabou coalfield, in particular, enjoyed little success because it was too geologically complex.

Except for William Hussey’s Inverness operation begun in 1888, from 1865 until 1900 mining along this coast was erratic and unprofitable. A major problem was the inadequacy of their scow-and-schooner transport system.

Only after the railway opened from Inverness to the Strait of Canso in 1901 did the industry take off in the western area. At Mabou and Inverness the coal companies invested in infrastructure of rail spurs, wharves, and workers’ housing. The St. Rose area underground mines, lacking rail transport, operated on a much smaller scale but produced coal almost consistently from 1918 to 1992.

While early days drew big investors, the large operations ultimately ended in economic failure. Over the years in Port Hood and Inverness, small mines were developed by local entrepreneurs and mining persisted until the 1960s. The inconsistency of these operations together with intermittent shutdowns of larger mines made for a precarious living for mining families.

Although communities here lived with the ever-present hazards of coal mining, they eluded larger disasters, other than an explosion in Port Hood in 1908 that killed 10, and a fall of stone in Inverness No. 1 that took four lives in 1924.