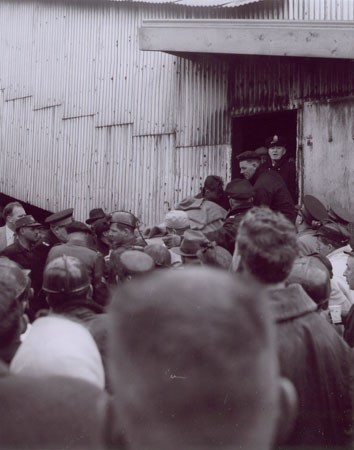 On November 1, 1956, 118 men were working deep in Springhill’s No. 4 mine, when six cars of a loaded coal trip (a trip is a number of mine cars linked together) being pulled by a cable to the surface broke away and went hurtling down the slope. The cars jumped the track and crashed into an armoured steel cable carrying 2200 volts of electricity. When the cable blew, its flash of fire ignited coal dust that filled the air from the smash-up, and a huge dust explosion followed. Although the explosion originated on the back slope, it roared through transfer tunnels to and up the main slope, wreaking devastation along its way. At 5:07 pm a sheet of blue flame shot up 60 metres in the outside air, incinerating the bankhead building and five workmen within. Two others died later of their burns, while two men thrown clear, survived. 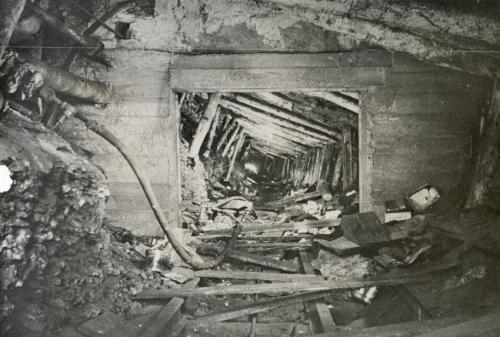 A draeger team assembled and rushed down the slope. Barely 100 feet down, they floundered in the carbon monoxide. Two rescuers died before the group could struggle back to the surface.

Once draegermen from Pictou and Cape Breton counties arrived to join the Springhill corps, Dominion Steel & Coal Company (DOSCO), the mine’s owner, organized a rescue operation. The draegermen entered No. 4 mine through a tunnel from No. 2. They found the aftermath of a terrific explosion.

The assumption was that the explosion originated in the workings, about a mile from the slope bottom. Such a fierce blast would kill anyone in its path, while the carbon monoxide would fell the rest. It was believed no one could possibly have survived. To risk rescuers’ lives on a fruitless task would be foolhardy. The decision was being made to seal the mine. Then it was noticed that the compressors that sent air underground to operate machinery were still working.

Under perilous conditions, draeger teams laboured their way down No. 4 mine, clearing debris, and sealing off the fires to smother them so they could bring down fresh air to get rid of the deadly and volatile gases. 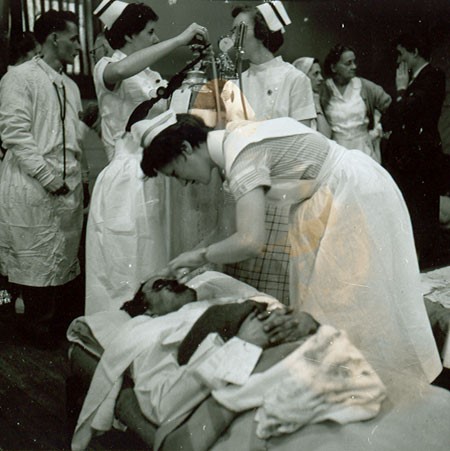 Indeed, miners were alive, trapped between the methane seeping from the coal and the carbon monoxide created by the fires. Two groups of men had barricaded themselves from the mine air and clustered around compressed air pipes. On Saturday, seven of these men started crawling up through a fanway.  With their noses plugged, they made small slits in an airline to breathe and stopped at valves for a good dose of oxygen. They came upon the second group of trapped men and kept crawling. At the 3500-foot level they met the rescuers.

The push was on, with barefaced volunteers joining the draegermen.  Sunday evening the deepest group of survivors was reached and all were out by Monday morning. 88 miners were rescued; 39, including the 7 on the surface, died. The volatile mine was sealed. In January it was reopened to retrieve the bodies, then permanently sealed. After this explosion, the Coal Mines Regulation Act was amended so that high-voltage cables were no longer permitted in coal-hoisting slopes. All had to be in return air or man-traveling slopes.