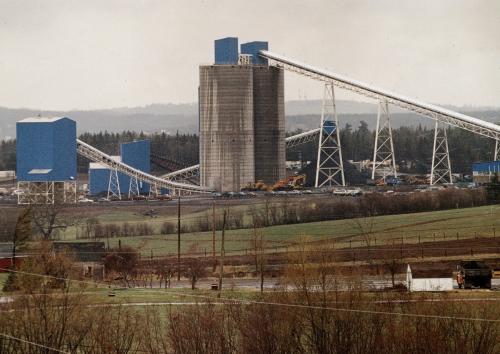 The Westray Mine, Plymouth, NS ca. 1990. Courtesy of the Pictou-Antigonish Regional Library, scan0003.jpg.

Refusing To Learn From the Past

A long history of methane explosions in the Foord coal seam meant that the risks were high in mining that wide band of coal. In April 1991, digging at the Curragh Resources-owned Westray Mine had reached the infamous Foord, the cause of innumerable roof falls, fires, and explosions in other collieries in the past. In this modern mine, the assurance was that state-of-the-art technology and engineering would defeat the hazards of the volatile geology.  Not so, said experienced miners.

The Westray mine was in operation less than a year when disaster struck. At 5:18 am on Saturday, May 9, 1992, a great, blue flame flashed out of the mine opening, a cloud of black smoke on its tail. Nearby, houses shook and windows rattled. A mile underground, 26 miners were nearing the end of their shift when this massive explosion tore through the mine. Over the ensuing six days, local and regional draeger teams battled the wreckage to rescue the men. They encountered nothing but sheer devastation: mangled and twisted roof supports and machinery, piles of coal, stone, and debris. They described conditions “like a horror movie”, “the devil himself would not go there”.  As the draegermen advanced and ventilation was restored, barefaced men bulldozed the huge blockages. 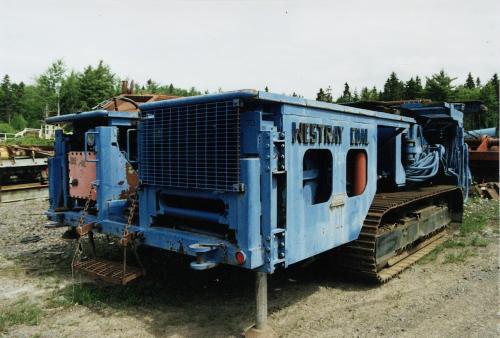 A roofing bolter from the Westray Mine. MOI Collection C&G scan.

Thirty-one hours after the explosion, rescuers broke into the South West section to find the lifeless bodies of 11 comrades. On Thursday, after four more bodies had been recovered, the mine owners ended the operation because of the treacherous conditions for rescuers and acknowledging no hope that anyone survived such a devastating explosion. The methane-fired, and coal dust-fuelled blast had ripped through every part of the mine. Bodies of the 11 remaining dead had to be left in the deep, where they remain today. 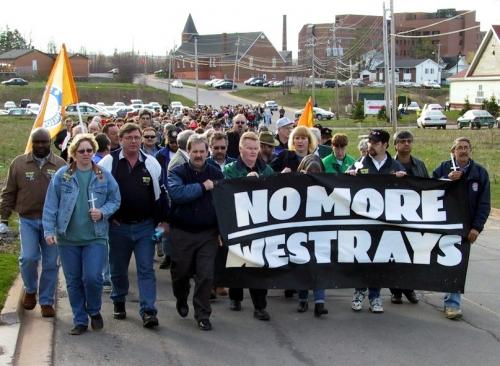 Concerned citizens marched to insist on no more mine tragedies like Westray. Photo courtesy of Peter Boyle.

In the aftermath of the explosion came allegations of dangerous practices and conditions underground, the most serious of which was a build-up of coal dust, which is illegal in mines. After the aborted criminal trial of Curragh Resources Ltd. and two mine managers, a public inquiry got underway. The Westray Public Inquiry under Justice Peter K. Richard found the likely cause of the explosion was a spark from a coal-cutting machine hitting stone. This ignited a build-up of methane near the roof. The ensuing explosion and fire stirred up the abundant coal dust, accelerating the explosion throughout the mine, killing all in its path and leaving deadly carbon monoxide behind.

Justice Richard ruled that everyone in authority from the owners, the management, and the Nova Scotia Inspectorate was negligent in their duty of safety and care. Through lobbying by the United Steelworkers of Canada and the Westray Families Group, the “Westray Bill” was passed in Parliament with all-party support and came into effect on March 31, 2004.  Bill C45 amends the Criminal Code of Canada to assign legal responsibility for workplace safety to organizations, their representatives, and anyone directing someone’s work.

Coal and Grit - The Tragedy of Westray - explore the history and stories behind Coal Mining in Nova Scotia.