Fire In the Mine

On January 14, 1952 a fire was detected in a balance in the Number 7 Level, West Section of the McGregor mine. As it was giving off too much carbon monoxide and heat for bare-faced men, a draeger team was engaged to build off the fire with temporary stoppings. (A stopping closed off a mine tunnel so that fire and gases could not spread.) With the heat and smoke coming down a 40-degree incline, the job was torturous for the draegerman encased in their fire-fighting and breathing gear, but they completed the job. 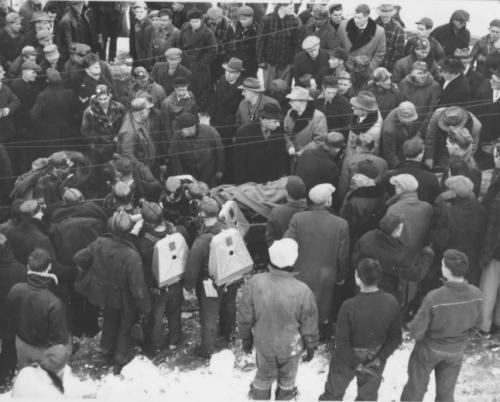 The company considered it safe then to build permanent stoppings and called in 19 of their best miners to wall off the area. Within an hour the balance exploded. The draegermen were called back, and after travelling 6500 feet underground, they found destruction all around and the bodies of 19 comrades, the “cream of the pit” as they were called. Rock dust had contained the blast, preventing the explosion from spreading. This allowed three men salvaging equipment in the balance about a quarter-mile from the explosion, although injured, to crawl to fresh air and safety. A few others working at the slope bottom also escaped. No cause for the explosion was formally determined. However, one theory posited was that once the stopping was built, air was cut off to the fire. This fire was in an incline.  Methane, being lighter than air, was above, with air pressure holding it up.  With the fire using up the oxygen above it, the methane descended over the fire, and exploded. Had the fire been on a level, it would just have burned out after the oxygen was used up, as was customary. After this explosion, a new rule came into effect. Once  temporary stoppings were put in, the mine must be vacated for 24 hours. Then air tests must be taken before men were allowed back in.

Download PDF (12 MB) of some newspaper clippings from the McGregor Mine explosion.